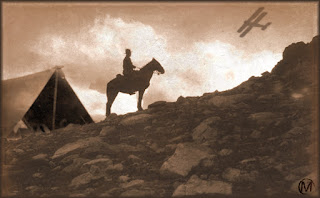 Posted by Michael Douglas Jones at 12:08 PM No comments:

Perigee Moon ~ L'assemblage by Michael Douglas Jones  ©2020
Milk glass sky, its curtain of clouds, wispy white, twilight, moving stage right for the star of the evening; perigee moon.  Firefly ushers, with soft light, show us to our seats, while passerines pair up in birdsong, the opening act. Perigee, her dance of veils behind the locust tree; each veil drops; the black, the gold, the red, the silver, as the artist pours a pint of ale.  Oh, Pensée; he is waiting for epiphany; perigee moon.
Posted by Michael Douglas Jones at 3:23 PM No comments:

One o’ them two dollar words... 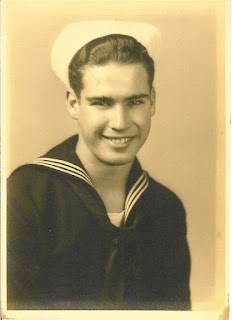 After Pearl Harbor, my father enlisted in the Navy to fight Fascism. On December 11, 1942, his ship, USS SCOTT was torpedoed, and sunk off the coast of Africa during the Allied invasion of French North Africa. The torpedo hit the Starboard side; the ship burst into flames and foundered, but owing to the availability of landing craft for rescue, casualties were limited to 59 men. My father was a landing craft pilot. He was only 17 that day.

Now, Fascism was too big a word for a 16 year old Virginia farm boy with a sixth grade education, but he knew it by its true names. He knew the bully harming weaker folks, too young or too old to stop them; the bigot hating the “coloreds” and the “come-heres”; the big man belittling women and treating them as chattel; the straw boss rewarding his buddies; the revivalist bathing in the baptismal font with a gifted jug of bootleg whiskey, before launching into an hour of fiery brimstone, and eternity in the sky. Yeah, fascism was one o’ them two dollar words, and where he was raised, and where I was raised, life, all life was precious and was not ours to rule or roll over.

Here we are, nearly 80 years later, still fighting Fascism; we just have to VOTE. 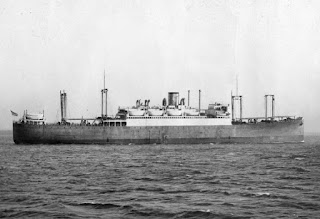 Posted by Michael Douglas Jones at 8:57 PM No comments: 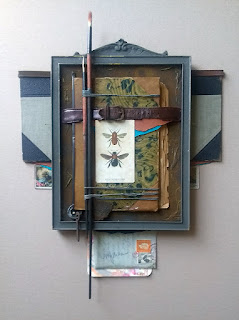 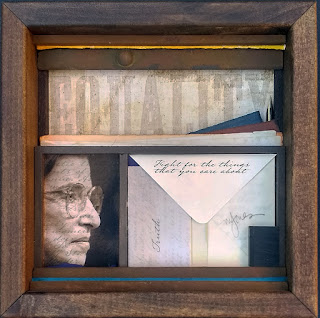 EQUALITY 2020 ~ L'assemblage by Michael Douglas Jones  ©2020
"Fight for the things that you care about, but do it in a way that will lead others to join you."
~ Supreme Court Justice Ruth Bader Ginsburg
·
In the middlenight, we plant by moonlight; when we falter at the ridge on the burnt hill road of equality, we will not fall, we remember your promise on that last day, and keep climbing.
We do not grieve for you; we will miss you more than all we’ve lost, but grief is for the suffering and you did not accept suffering. Your reach is wider now; we did not think that possible. No longer from anywhere, you are not of any age; you have always been, and will always be the voice, the plan of the planter; sowing the slow growth of equality.
They that seed are everything; they are the breath, the whisper, the promise of all that came before. Your lantern shines through the chiaroscuro, from every starlit flicker to the blueblack wings of night, and we will hold that ageless flame before us, and go, as you would go, to the ridge where the hardwood seeds will grow.
…
Posted by Michael Douglas Jones at 5:40 PM No comments: 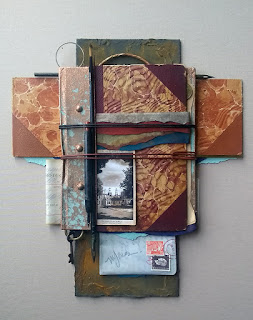 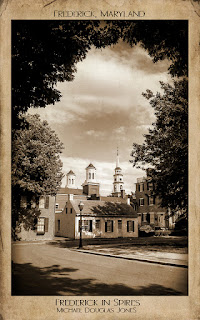 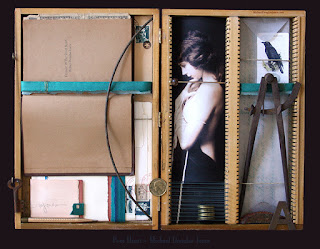 
My poet heart is writing on a pass of paper clouds moving left to write across the frozen northern fields; a crystal breath, billowing, filling the late afternoon with wonder and words that appear, and disappear, in moments of vivid crescent light and violescent shade.

Crows flock in as punctuation; a caw here, a comma there, returning to roost in the fine handwritten script of bare maple branches. Turkey vultures sail in too, crossing the T's of hickory trees, and underlining the rhyme in blueblack. From my cottage, to the south behind, a faint scent of bitternut smoke colors this poem in bittersweet.

And here I stand in the still, below the westwrit wind; my pencil in my pocket, my poet heart tucked up my sleeve. I raise my hand to write this down, to carry it in leatherbound, but the pencil pulls the poem apart, and all of this begins again.

My poet heart is writing on a fade of falling dark.

…
Posted by Michael Douglas Jones at 10:06 AM No comments: