Each morning is our springtide, and a future field stretches out before us, curving over the horizon, beyond all imagination. Full of possibilities, it is ours to tend. If we think this field fallow, it will be, and we need do nothing further. If we think it fertile, it will become a garden, and blossom beyond all we know.

Posted by Michael Douglas Jones at 12:45 PM 6 comments: Links to this post 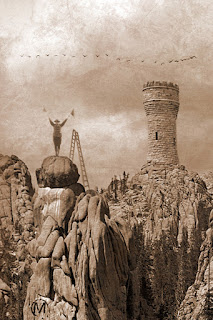 U. Building the Broken Heart

Posted by Michael Douglas Jones at 5:55 PM 4 comments: Links to this post 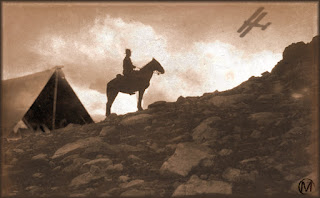 The Seeder
Journal Entry; 3.22.12
Nearly four hundred years ago, we sailed west, and here, met our kin who had moved east long before that. Upon landing, there was great celebration, but the camaraderie was short lived; the long separation had turned many hearts to flint and within fifteen years, the first of the twenty-six wars began.
After all this time, there is still a divide that separates the blue tribes and the reds. Small skirmishes flare up often and the opposing tribes have gradually separated to camps and cities scattered through the land. After four centuries, it’s difficult to tell your red relatives from your blues and I would not choose between two wrongs. I’ve, also, never been accustomed to the babble and chatter of the cities and camps, so I lived off the land between the camps and became a seeder.
There are other seeders like me; we ride between the camps, bringing books, sharing seeds and small deeds of compassion, giving credit to a neighboring camp. Our goal, perhaps impossible, is to bring the tribes back together. Mostly, we are seen as dreamers; naïve, harmless, like artists and poets. There are those that view us as gypsies, or perhaps spies of some vast conspiracy, so vigilance is always our watchword. When I meet other riders traveling between the camps, I have a cautious word with them, until I can be sure that they are seeders also. We never gather in groups; we pass short messages, called 140’s, to one another about our progress, and where we have seen sparks of understanding. We are not here to gain merit; most of us fell into this role when we were still quite young. We will ride until these tribes become one again. We don’t expect to be leaders of a new tribe; the seeders are a loose affiliation, though some have called us the Scintilla Tribe.
::
For more information: scintillaproject.com

Posted by Michael Douglas Jones at 5:43 PM 2 comments: Links to this post

Faith as I Find It

Scintilla Project. Day6  Talk about an experience with faith. 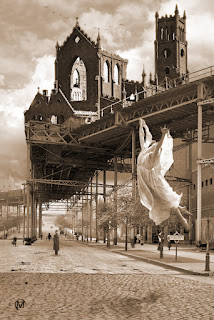 
I have read the volumes about angels in the air, seen my share of Sunday sermons, stood inside the stunning limestone cathedrals, and sat beneath the vault of heaven, but this is my experience of faith, as I find it in every moment of the everyday.

Posted by Michael Douglas Jones at 1:06 PM 7 comments: Links to this post 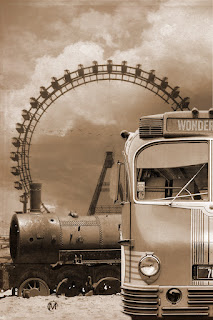 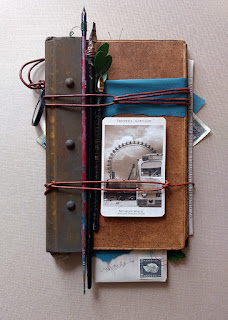 The Wheel of Wonder ~ L'assemblage by Michael Douglas Jones  ©2019

Posted by Michael Douglas Jones at 2:05 PM 3 comments: Links to this post

The Scintilla Project. Day3.
What's the story of the most difficult challenge you've faced in a relationship? 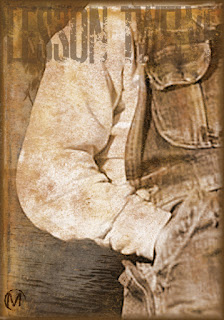 Lesson Twelve
Daddy pulls his belt off, folds the strap in two, lets it slack, then snaps it back. POP! Like a cap pistol. CRACK! Like a firecracker, this hot July morning. What sorry soul taught him that cruel trick; the warning shots before the beating begins. I’m twelve now, so I get the strap on the backside because the baby spilled the sugar bowl. I’m twelve this time, so what daddy doesn’t know; I can only fight back by giving no satisfaction. I’ll not cry this time. I’ll never cry again. Go on Pop; snap the strap, let it loose; I will never cry again. Never.
Some moments are riverstones collected years ago, carried in the deep pockets of our memory. On the dark, doubtful nights, we run our fingers over the stone’s surface, feeling the same as when we first held it.
Today, I throw that moment into the middle of the river; forget, regret, forgive, forget.
::
For more information: scintillaproject.com
Posted by Michael Douglas Jones at 10:32 AM 4 comments: Links to this post

Scintilla Project. day2. When did you realize you were a grownup? 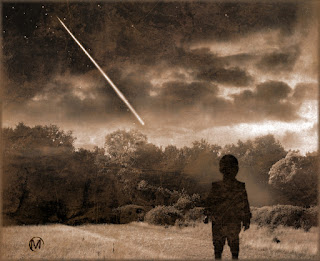 Wishing
This morning, predawn; a hobbled greybeard on the dew path to the fox hollow road; oakwood smoke in the air below the last half moon of winter; the slightest hint of Eos rising, beyond the eastern treetops, above the winding valley branch. Wrens and redbirds staccato in the maples before the crows take flight. All the players are in their proper place for the shooting star, brighter than the moon, from zenith to the valley in a second; a moment only, but in that flash, a greybeard becomes a boy again, a child of wonder, wishing on a star.
He wishes for a walk upon a dew path to the fox hollow road.

::
Posted by Michael Douglas Jones at 1:16 PM 4 comments: Links to this post