My Brother, My Hero 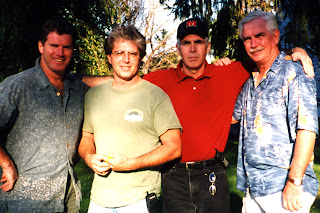 Life, in any form, should be impossible; every moment, however mundane, is a miracle. Very few people ever see that, and that is as it should be; otherwise we might stand about all evening, staring at leaves of grass. When I first read Walt Whitman, I saw that he knew the mundane miracle. My brother, Jeff, also saw miracles at every turn of the world. He had no B.A. or B.S., especially no BS. His word was truth, and you could count on it like coins.

He was a robust man, an eighteenth century man, cutting through the fog facade of politics, while felling a tree with an iron axe; laughing at the foibles of religion, while whispering with the spirituality of a saint. He held all people, of every station, in high esteem. He was my hero, even though he was younger by four years; he had grace, wisdom, and rough-hewn character. I thought he was invincible; death could not touch him. This day, he passed. He is invincible; even in death, he cannot be touched, unless one could touch everything at once.

There, reaching out, at the end of your fingertips, you will find him, in the miracle.
Posted by Michael Douglas Jones at 9:50 PM 11 comments: