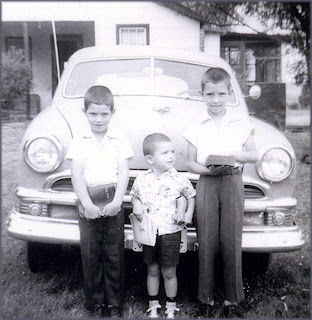 Whenever I’m in my Jeep and on the road, my soundtrack is playing, even if there is no sound at all. All driving has a soundtrack; I know nothing about plugs or points, but I know about the soundtracks. I might be driving to the beach, or to the school, or simply running out to the market for milk. It’s playing; I can hear it, and if I cut my eyes quick enough, I even see the opening credits projected on the lane beside me. The soundtrack changes with my mood, and the music started before I could drive; long before.

The long hour of Sunday school was over, and Pastor Bell was about to launch into an hour of fiery brimstone, or eternity in the sky; it was always one or the other. On certain Sundays, there would be communion, and the ushers passed around tiny shots of Welch’s Grape Juice and cubes of Wonder Bread to those saved sinners in the congregation; blood and body of Christ, with a taste of jelly bread. I was baptized the year before, when I was six, for I had found the love of God in my second cousin, and wished to be baptized alongside her, in case there was chronological seating in Heaven. Normally, I would take communion, but that spring and summer, this sinner had other plans.

As often as possible, but not enough to arouse suspicion, I would complain of a tummy ache caused by the ritual Sunday school Tootsie Roll Pop. My father was an usher, so he was busy ushing, and my mother was motherly, so she would let me go outside to the car to rest on the backseat until the service was over.

I would hold my bible with one hand, and my tummy with the other, walking achingly slow out to that 1950 baby blue Ford, and as the tall double doors to the church slowly closed for the sermon, I slid in behind the huge steering wheel and turned on the radio. My father always parked under the old oaks, facing west, which was perfect, because that's where I was headed, straight out Route 3 to the Blue Ridge Mountains. Behind me was the cemetery; the tombstones a row upon row of stop signs. Stop playing, stop singing, stop that crazy rock and roll. In front of me were the mountains and the music. The car didn't have to move; the music moved me, and for an hour, the bible in the backseat, me in the front, left arm resting on the open window, right hand on the suicide knob; aloud and alone, I sang to the AM radio. The Everly Brothers’ Bye Bye Love.

So, I won’t be sitting next to my second cousin in heaven, but I've heard the music and I've been there before. 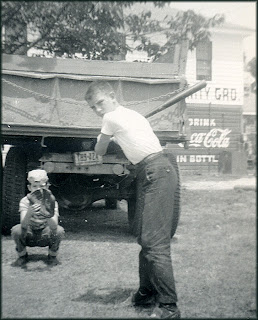 I was eleven when we moved to Lock’s Corner, halfway between Fredericksburg and Bowling Green, a few miles east of Guinea Station, where Stonewall Jackson died. The previous year, we left our Wilderness farm, where that same Stonewall lost his arm. It was Virginia in 1961 and the War Between the States still reckoned into every description of place. The Lost Cause scratching at the door for a hundred years.

My father had his own war inside, and was plotting another new strategy, another new start. He was the son of a blacksmith, and never found his place in this world. There were many new starts, new dreams, but this was one of his last, before the dreams were lost to drink. In Lock’s Corner, there were only six small homes, but, right on the corner, my father rented a house with an old general store on the first floor. He named it Community Grocery and painted it bright white with a red “Drink Coca-Cola” sign on the side, offering Pure Oil at the pump for twenty cents a gallon during the gas wars of ’61. He would sell everything, from penny candy to pickled eggs, and life would be a dream.  Every customer had good credit, even if they rarely paid their bill. Between the gas wars and the unpaid tabs, it was inevitable that the store, the dream, would fail, and we would move on to the next battlefield.

The time came, as it always did, that my father got into a fight with the other local drunks; this time he was outnumbered as they stomped him on the ground.  My mother grabbed the rifle to run the men off, but my father was beaten enough to stay bedridden for awhile. That summer, my twelve-year-old brother and I worked the store, while my mother took care of our father and two younger brothers upstairs. I can’t say that I was very good at being a shopkeeper; when I pumped gas, the driver would likely pull off, calling from his car, “Tell your father, I’ll pay for that later.” I would likely never see that driver again.

I rarely think about it anymore, that war before this war, and never called it a job, because there wasn't money to be paid.

“I bet I can drink mine down in four seconds.”

My pay for the day was an orange Tru-Ade and a Hostess cupcake, and in four seconds, half of my pay was gone. Tru-Ade was a non-carbonated soda, so we could drink a whole bottle in no time. I should have savored that soda, they weren't an everyday deal, but I had to beat my brother in some silly sibling rivalry. For awhile, at day’s end, we would be kids; our father was upstairs, but we knew he wasn't coming down to stop our silliness. That was the last summer that we weren't blamed for his failures; that was the last summer that we could be kids.

The store, the war, continued for another year before he gave up and moved north to another dream, but the dreams became smaller, as the wars became larger, until his final surrender.

There's a 2010 photograph of the store on Google maps and it still stands on street view: http://goo.gl/yk7hr