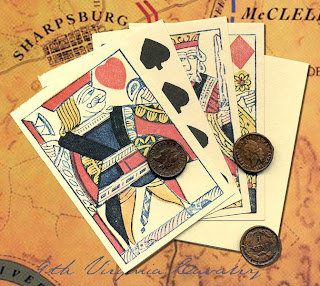 Worry not, for I am well. By the time this letter reaches you, I am sure you will have heard about the battle at Sharpsburg, or if you see a northern newspaper, the battle of Antietam. We cannot even agree on what names to give the battles; they name for the nearest river, we name by the nearest town.

We crossed the Potomac River into Maryland on September 5th, and travelled through Poolesville to Barnesville, then New Market. High atop Sugar Loaf Mountain, we could see so far that I looked south to imagine your face looking north as you awoke. Riding through Frederick City, which seems so similar to Fredericksburg, I was immediately homesick. At dawn on the 14th, the regiment crossed South Mountain and rode through the day and night toward Boonsboro near Sharpsburg. During the main battle we were detached behind the lines to gather stragglers; the Federal artillery rounds passing over our heads like dark, iron thunderclouds; loud, but not raining down on us.

Your friend, Charles, did not fare as well and was badly wounded; the infantry always takes the brunt of the battle. His unit, the 30th Virginia Infantry, lost three-quarters of their men in a period of perhaps fifteen minutes near the Dunkard Church. This morning, I was riding south towards the Potomac River, when I saw Charles in an ambulance wagon heading, hopefully, back to Fredericksburg to recover. For him, this weary war is over. Despite his wounds, he was in good spirits, or pretended to be so. When he saw me, he started to sing, “If you want to have a good time, jine the cavalry!”, although his voice, like his body, was weak.

I want this letter to go along with the wagon train back to Fredericksburg; I know not where I am bound, though I am bound to you always.


Journal Entry: September 19, 1862
At dawn on September 15th, we entered Boonsboro, and even though there were large blue masses of troops off in the distance, I did not think we would be the ones to open the ball at this bloody battle. As we moved into town, there was a large building on the main street, a hotel, I believe, that was being used as a hospital for soldiers from both sides and we meant to secure it. The streets were narrow, so our unit was spread thin and could not hear the orders from front to back. Suddenly, we were attacked from everywhere at once. I was at Colonel Lee’s side when his horse went down under carbine fire and Private Lewis offered his mount to assure the Colonel’s escape in order to rally the rest. Fire flew from the front and sides; we were even fired down upon from the upper bedroom windows by Boonsboro citizens. We were the forlorn hope with hornets heavy around our heads, stinging from every direction. Whitewashed fences were shattered from shell and shot, young boys shattered as well; their faces washed white with shock. We fought our way out of town wildly with sabers and sheer luck, except for the thirty boys whose luck left them that morning. These are truths that I will not share with Marianna, for she has worry aplenty without my minor complaints, especially minor when compared to the two days after, which have wrought a red field of devastation that no man has seen in our history and shall likely not see again. That night of the 17th, it was difficult to cast a sleeping blanket on the ground for every inch seemed covered with those forever sleeping. And we could not sleep, and may never sleep again without that scene searing our eyes.

Two weeks ago, when we crossed into Maryland, we entered the dangerous unknown, a completely different world that looks identical to my world, but here, there are new rules, new risks. The families look identical to my family; yet here, I am not king of the castle, I am the knave, the rogue; it is an impossible trial that I may not endure. I feel as if I am in a travelling grotesque gypsy show, a player upon a strange stage, where all actors switch roles with each new scene. Those that were once allies are now enemies. The props and scenery change, act to act, from idyllic green gambol to flaming red horror. I feel that I have gone mad; we have all gone mad, for there is mayhem and madness all about me; good men killing good men, all for the glory of our state, our country, our homeland that once we all shared.

Do the other actors in this folly feel the same, would they listen, or think me the fool. To the other actors I plead; I have passed through your streets unnoticed and, at other times, paraded through those same streets as the hero. I have been hailed, I have been hanged. I have played every part in this once glorious play. Now I know not who I am at all. Am I hero; am I villain? Am I complicit in this crime, this horror? Of course not; of course. How will I ever return to my Wilderness home, to my Marianna; will she even recognize me in this character I now play. Could I change my role even if I wished, or am I doomed to play this madman forever?

The older veterans speak of the “soldier’s heart”, a sickness born of combat; the hurt of a hollow heart, the haunt of a hollow stare; an ancient disease brought on by the horrors of war. I must have that hollow heart; the part I play; the Knave of Hearts.

Charles Grimsley was a corporal in the 30th Virginia Infantry, Co. I., wounded at Sharpsburg on September 17, 1862. He was the great-great-grandfather of Michael Douglas Jones.

23,000 total Americans, Northern and Southern, killed, wounded, or missing during this one day of fighting on September 17, 1862 at the Battle of Sharpsburg; the single bloodiest day ever in the history of America.
Posted by Michael Douglas Jones at 7:16 PM