Here and There, Then and Now 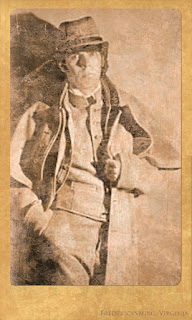 When Catherine Moreland at the Delaplaine asked me to start this art/journal project commemorating the Civil War Sesquicentennial, I had no idea that it would become an autobiographical memory. My intent was to show the incredible change in America during the second half of the nineteenth century leading to the Gilded Age, but in relating what may have happened on a personal journey of a particular cavalry trooper; his story became my story. Perhaps, Fellini was correct that, “All art is autobiographical; the pearl is the oyster's autobiography.”


As I research the rather sketchy history of the 9th Virginia Cavalry, I try to fill in the blanks based on my own history and emotional connection to the land where that trooper and I spent our childhood. Because I had at least ten ancestors that rode with the 9th Cavalry, I could be cut from that same cloth and I find that, after reading a couple brief sentences from the regimental history, I am effortlessly transported to the time, the scene, and the emotion. Having been in the military during the Vietnam War, I empathize with the trooper’s pain of uncertainty and the loneliness of life far from home.

If I leave the comforts of my modern home, sitting or walking outside for a time, I move back and forth between 2010 and 1862, from here to there, then to now, as if there were no difference, and possibly, there is none. Perhaps, as philosophers and physicists have said, there is no past or future; there is only now, this very moment. I have tried, for years, to see the logic in that theory, but only with this project, have I felt it in my being; a deep connection to each and all across time.

My projects always take on a life of their own; it could be my life; I just didn’t know before.
Posted by Michael Douglas Jones at 9:14 AM